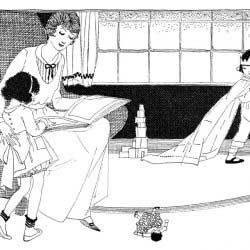 The ‘Surplus Women problem’ was hotly debated in the 1920s. In Britain, as a result of the carnage in the Great War and subsequent influenza pandemic, there were over 2,000,000 more women than men. One in ten of them would never marry no matter how desperate they were. Advertisements in newspapers like the following were not uncommon: Lady, fiancé killed, will gladly marry officer totally blinded or otherwise incapacitated by the War.

But young women condemned to a life of dashed hopes and thwarted dreams were only part of the landscape; those lucky enough to be married had their own humiliations to face. Sadly, this contemporary newspaper report was not trying to be being ironic:

“What you want is a good hiding, and your husband ought to give it to you,” said Mr. R. J. Ward, a magistrate, at Liverpool Police Court yesterday, to Mrs. Helena Willis, aged 40, who was charged with attempting to commit suicide by jumping into the Mersey. Mrs. Willis said that she had had a quarrel with her husband and was depressed.

Whilst you’re still reeling from that, that a look at this newspaper columnist’s justification for why it was routine to ask women a raft of personal questions when they applied for a job as a typist in the 1920’s:

1. A girl not living at home is considered to be unruly and wilful and is not looked upon favourably.
2. The father’s business gives an idea of her social status and education.
3. The possession of brothers indicates whether she is accustomed to male society.

It’s not worth even trying to guess how insultingly the interview questions were phrased.