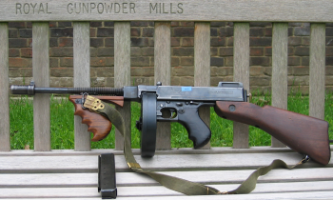 Research can really mess with your head. This tommy gun did it for me.The second of my Dance Quartet novels, Dancing with Death, was to be set on Cuba at a time when it was infested with mobs of rum-racketeers keen to sew up the lucrative Prohibition America market for themselves. So, guns-toting gangsters were on the agenda. And I knew nothing about guns. Preferred to keep it that way, in fact.

Fast-forward to lunch with a pal who was going to visit the Royal Powdermills with her writing group (one of them a volunteer, so a private tour). How could I turn up such an opportunity? I started the day making sniffy pronouncements about instruments of war and such like (there were no reproductions here, all were real and had probably been fired at another human being) determined to engage no more than necessary to find out the telling details of my weapons of choice. But by lunchtime I was hooked. I loved them. Not for their killing ability, you understand, but their precision engineering, the beauty of their lines, and (I’m a tad ashamed to say this) a revolver’s satisfying weight in the palm of my hand.

Don’t get me wrong, I’m not by any stretch of the imagination saying that I suddenly became a convert to the possession and use of firearms but sometimes we are lucky and our research can open our eyes and our minds to the glaringly obvious. I was writing a book featuring some pretty heavy-duty gun violence; I write crime stories for your entertainment: death for delectation, if you will. So hadn’t I been more than a little squeamish and hypocritical about getting up-close-and-personal with an array of decommissioned weapons? Food for thought indeed.

And the results? I hope you’ll agree this extract from Dancing with Death shows that my decision to spend a day at an armaments museum had been a good one:

He reached into the crate and pulled out the first of the Thompson sub-machine guns. His fingers slotted themselves naturally into the grooves of the two shaped pistol grips as he held it up for examination. Stripped of its magazine, it was slim and sleek; its blue-black ribbed barrel looking like the thinnest of window-bars made by the best of Cuban craftsmen. Contrasted against this precision, the stock and grips were all flowing curves, the grain of the wood making the weapon look approachable and warm. Asking to be held. Almost friendly. But there was no doubting the intentions behind the silver bolt protruding from the breech and the thin curved trigger.