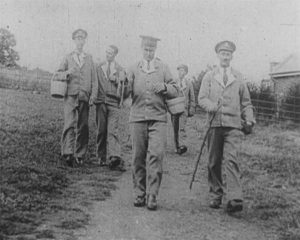 I’d always had a horrified fascination for the way shell-shock had been regarded during and after WW1 (and Pat Barker with her immensely powerful Regeneration Trilogy played no small part in that). During my writing of Walls of Silence the subject rapidly moved from researching it as a factor in the background of one of the main characters, to becoming the central pivot around which the new science of psychoanalysis revolved. I wanted to explore how traumatic shock could transform a person – not just their lives – entirely and how some of the intolerance and misunderstandings about mental illness and psychological distress still persist today.

If, like me, you feel the need to find out more about shell-shock, here is a film from 1917 showing soldiers before and after rehabilitation at Netley Hospital. It does make somewhat uncomfortable viewing with its intrusive nature and pathetically poignant smiles for the camera, but you could do worse to honour the First World War centenary commemorations than taking a few minutes out watch it.

Film from Wellcome Library on treatment of WW1 shell-shock