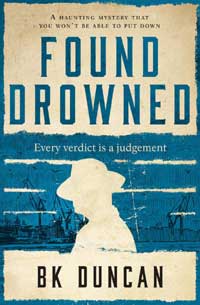 A writer often has to ditch some of the pieces they enjoyed writing the most – Quiller-Couch advised us to murder our darlings* – and I’ll be sharing a few of those I red-penned from Found Drowned. Of course, first I have to find where I’ve salted them away in various computer files. But to kick off, a short scene bringing to life an image I came across during my research and saved on the novel’s Pinterest board:

After nearly an hour skirting the walls around the West India Dock basins, May turned onto Preston’s Street and was rewarded for the long hike by the sight of a four-masted barque berthed for repairs in one of the graving docks. The bowsprit jutted over the entire width of the roadway, almost touching the roofs opposite. High above her head a sailor skittered along it like a monkey, swinging from the rigging as he headed to the very tip and the ropes for the flying jib. The ship’s figurehead gazed down on the street from the height of a third-storey bedroom; a woman with golden hair flowing in the wind and an expression that seemed to convey all the wisdom she’d acquired from her many voyages. May hadn’t seen it before and she hoped she’d see again – perhaps next time sporting a newly-carved arched eyebrow of wonder at a distant discovery. If she’d been born Michael Keaps, instead of May, she’d have liked to have travelled the world: there were times when Poplar felt it was closing in on her.

*William Faulkner was probably mis-remembering QC’s words from 1916 when he later wrote in a letter: In writing, you must kill all your darlings.