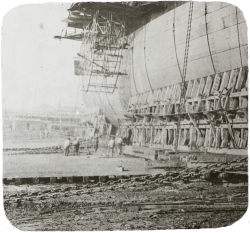 The old name for the Isle of Dogs was Stepney Marsh. A breeding ground for the mosquitoes that added ague (malaria) to the East End poor’s list of woes. It was a desolate place used to pasture cattle brought to London for slaughter. Things got better. If you count shipbuilding progress over cows. The Island was also big on making horseshoes.

By the time things had settled down after The Great War, the industries on the Isle of Dogs expanded beyond those supporting ships and shipping. As a youngster looking for a job you could take your pick from long days breathing in the poisonous air associated with making or processing:
disinfectant fluid;
linoleum;
tar;
oilseed;
paint & varnish;
nitrates;
sawmills;
timber;
antimony and gold ore;
earthenware;
coke and coal gas.
Although you could get lucky and work in the Morton or Maconochie factories where they made jams, soups, and pickles.

Given the above, it comes as no surprise that if someone was unfortunate enough to fall in the river they were taken to Poplar Hospital for Accidents and kept in for 24 hours.

But there was romance and a whiff of bygone splendour in the air too. Throughout the 1920s there were always square-rigged tall ships berthed in the East And West India Docks. And in Millwall Dock bang in the centre of the Isle of Dogs. Small shipyards such as Green’s, Fletcher’s or London Graving Dock specialised in repairing sailing ships. Just imagine bowsprits jutting out over the roads to almost touch the chimneys of the houses opposite, glorious carved and painted figureheads looming over the Islanders walking below. I wrote a short scene in Found Drowned after seeing a photograph of such a ship’s figurehead. As occurs with all the great films, it ended up on the cutting-room floor in the interests of running time, but I enjoyed the writing and I’m glad I’ve been able to find a use for it as an illustration of what deep research can throw up. You can read it in Undercurrents of Found Drowned.

You might like to visit my Found Drowned and Foul Trade Pinterest boards for some fabulous images of the sailing ships berthed in close proximity to the Isle of Dogs in the 1920s/30s.