The following satirical cartoons are from Modern Life 1913 & 1914. Although aimed firmly at the ‘chattering classes’ – those of an artistic bent and relatively well-to-do – they speak volumes about how women were viewed in the period leading up to the First World War. And during. And after. Things are not so very different now (if a bit more subtle). Misogyny has never gone out of fashion.

A bit of titillation mixed with disapproval to start us off with . . . 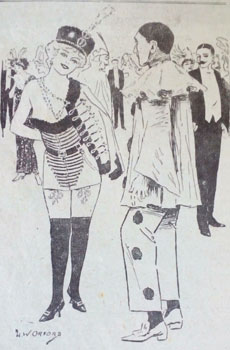 SHE: “What’s the matter? You’re wearing a blank look.”
HE: “And you, my dear, haven’t much on besides a vague smile.”

The Suffragette, and Suffragist, movements were extremely unsettling to the status quo. They were seen as threatening because of the widespread changes it was feared votes for women would unleash. They were right. Although society had a world war to contend with first . . . 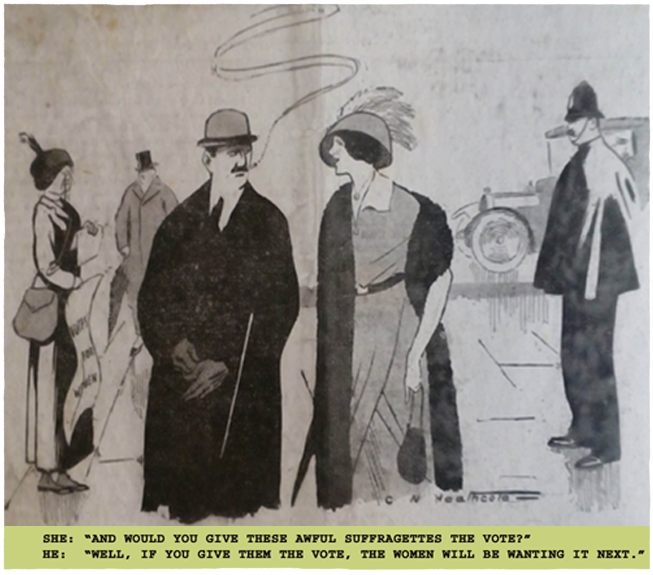 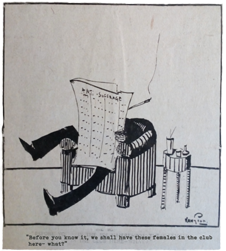 “Before you know it we shall have these females in the club here, what?”

In the following, notice how much younger the women are than the men. And, of course, beautiful . . . 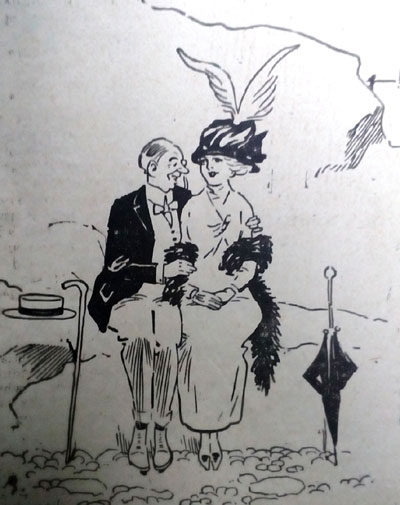 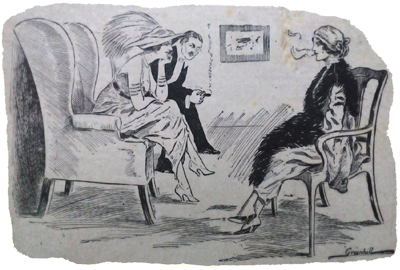 MABEL: “Why do you think he married his deceased wife’s sister?”
FLO: “So as not to change his mother-in-law, I suppose.” 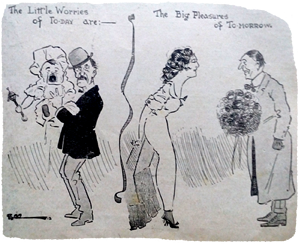 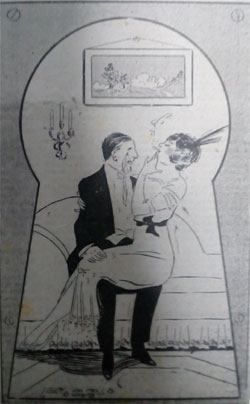 The above is entitled: Sitting it Out.

Less attractive are the mothers and working class women, who are inevitably portrayed as harridans and battleaxes  . . . 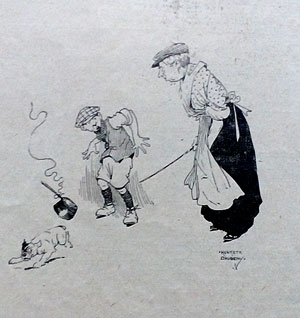 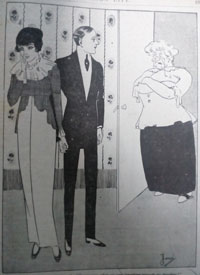 MA: (catching him in the act) “Young man, what are your intentions towards my daughter?”
HE: “I wish her to be my wife.”
MA: “Are you in a position to support a family?”
HE: “I think so!”
MA: “Think again, young man, there are ten of us!”

Women were seen as money-grabbing or scheming gold-diggers – understandably, perhaps, when they usually had no income of their own and were reliant on fathers and husbands for all their worldly goods . . . 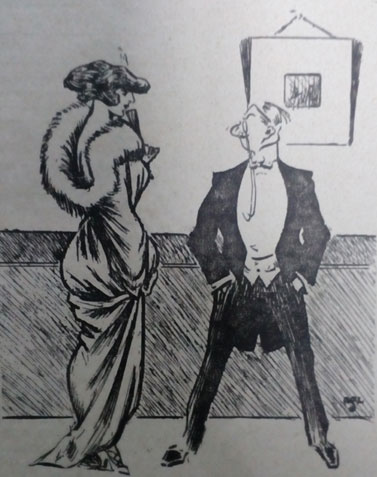 SHE: “Well, Henry, did dad ask you if you support me in the style to which I am accustomed?”
HE: “No, dearest, he merely informed me that he couldn’t, and gave me his blessing.” 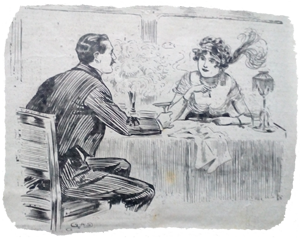 That’s when they’re not being vain, stupid or shallow . . . 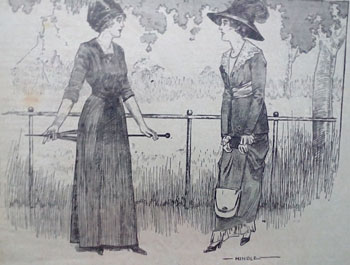 “Why do you treat Jack so shabbily, although he treats you so well?”
“Why, the dear boy couldn’t treat me any better, no matter how I treated him.” 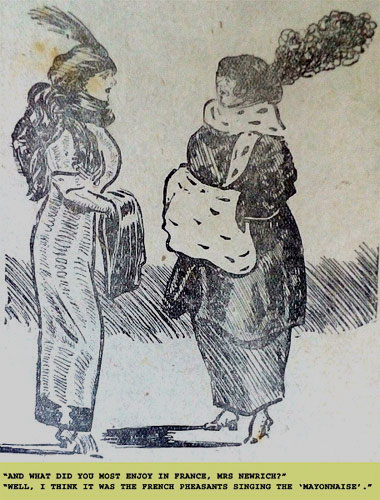 [Bit blurry this one but the original was worse still!] 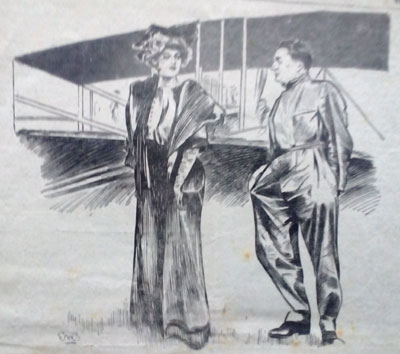 AVIATOR: “And you would not be afraid to marry an aviator?”
ACTRESS: “Oh, no! If anything happened I should get a splendid advertisement, and besides, I always look my best in black.”

And, occasionally, the men don’t come off particularly well either . . . 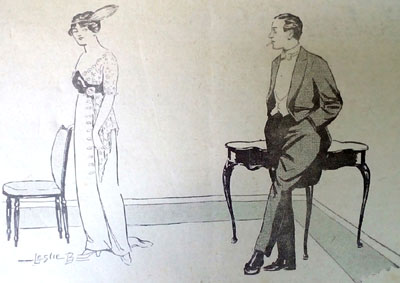 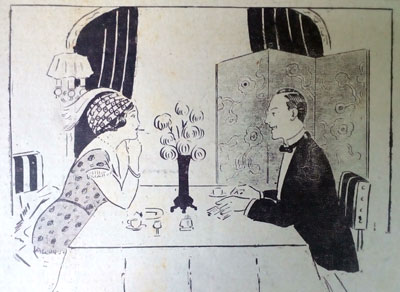 SHE: “Don’t you think it’s disgraceful for a woman to expose herself in an x-ray gown?”
HE: “Oh, it depends on how one looks at it!” 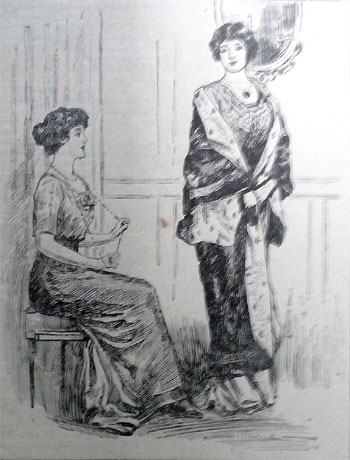 ROSE: “Jack is such a dear fellow. You don’t know what a big fool I make of myself when he calls.”
MARIE: “Yes, I do, he tells me all about it.”

You can find some more original images from 1913 & 1914 periodicals here: Time Stands Still and The Sporting Life.