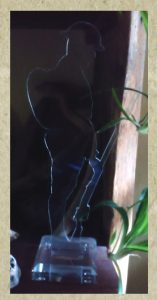 They went with songs to the battle, they were young.
Straight of limb, true of eye, steady and aglow.
They were staunch to the end against odds uncounted,
They fell with their faces to the foe.

They shall grow not old, as we that are left grow old:
Age shall not weary them, nor the years condemn.
At the going down of the sun and in the morning,
We will remember them.

In the United Kingdom and Commonwealth Nations, Remembrance Sunday is the one closest to when the agreement ending the First World War was signed on November 11, 1918, at 11 a.m.— the eleventh hour of the eleventh day of the eleventh month.

On November 10th 2018 – one hundred years almost to the day the guns fell silent – I participated in the most moving event of my life. In Harrogate library, Malcolm Hollingdrake organised an afternoon of readings, poetry, and song in honour of remembrance. 100 tickets were sold, individually named for one of the men & women who died in the conflict. 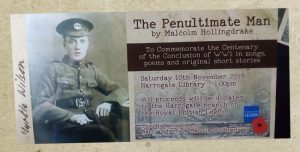 In the closing moments, poppies fell from the atrium balcony to the strains of Elgar’s Nimrod and a child’s voice rang out with spontaneous laughter. It was a moment I’ll never forget. Here’s what some of the others who attended said:

‘I would not have missed it for the world, so beautiful, very moving, it brought tears to my eyes’.
‘Words are not enough to express the emotion of the event and the whole concept of 1914-1918’.
‘The best part was unrehearsed, the child’s joyous laughter as the poppies fell. It gave me hope amidst the tragedy’.
‘Very moving tribute to commemorate the centenary of the First World War. This will stay with me for a very long time’.
‘A great tribute. A good variety of songs, poems and readings provided a vivid description of the experiences of those affected by WW1’.
‘Very, very moving, the WW1 explained well, the horrors not simplified. We could actually feel the mud, the trenches, the fear’.
‘An evocative and often emotional event to commemorate the ending of an episode in human history that was ultimately so futile but which also demonstrated the noble and indomitable nature of the common man’.

2017 Armistice Day was particularly poignant as it fell close to the centenary of Canadian troops capturing the village of Passchendaele and bringing the Third Battle of Ypres to an exhausted end on 6th November 1917. The three month-campaign is notorious for being fought in appalling conditions with the battlefields of Flanders churned into thick mud by shellfire and torrential rain, the countryside devastated and blasted into Dante’s Vision of Hell. Over 585,000 – say it aloud: more than half a million – soldiers on all sides of the conflict died, an estimated 42,000 bodies never having been recovered.

Find out why the words of Laurence Binyon’s poem, written during the opening year of a war that shocked the world, matter as much now as they did then. Passchendaele 2017

The image above the poem: There But Not There WWI infantryman as he stands on my shelf. There, but not there. As they all are and will be forever.