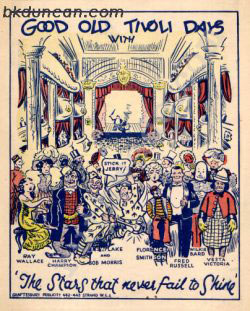 I’ve always been fascinated by the theatrical life of yesteryear. The closeted artificially of backstage life, and the rise and decline of music hall as mass entertainment. And a little limelight must be in my blood because these theatre advertising postcards were drawn by my great-uncle Arthur (I’ve also some 1927 theatre playbills with his caricatures of the headliners on my bedroom walls. But I digress . . .).

When I decided to include a theatre in the May Keaps series, I had to do a lot of research to get the period right. Historical accuracy is very important to me because if I’m not convinced of the authenticity of the worlds I create, then how can I expect you to be? So as well as expanding my existing knowledge through studying some wonderful online resources for researching Foul Trade, I read contemporary theatre memoirs; accounts of trips to music halls by Thomas Burke, George Sims, H. Chance Newton, and Horace Barnes; The Stage Year Book of 1914 and 1919; the lives of some of the greatest stars of the boards – Marie Lloyd, Vesta Tilley, Little Tich, Dan Leno – as well as those now long-forgotten; books on the history of music hall (Roy Hudd, in particular, was a mine of telling and fascinating detail – visit the Hudd music hall archive project) and the role it played in society; plus everything written on the subject by the wonderfully opinionated J. B. Priestley. I also visited a couple of old music hall and variety theatres in the hope I’d absorb some of the atmosphere by touching the walls and listening out for the distant echoes of long-dead performers. 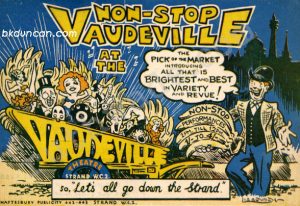 Topics such as this are great to research because it is the telling details of life in that world that really sets fire to the imaginations of writer and readers alike. When we are granted access to closed worlds (and those working in the theatre still call non-theatre folk civilians to this day) we feel privileged, and to be given a backstage tour or sneaky preview goes further by making the experience stand out as special and memorable. In a sense we have exactly that same reaction when we are given a glimpse of the past because, that too, can never be inhabited by outsiders, only recreated. And that’s what I try my best to do.

Here are some more pieces I have written on the topic of music halls and variety theatre:

Clear the stage, dim the lights