I love the way J.B. used language and images to draw the reader into his world. It didn’t matter whether he was writing a travelogue or a novel, essay, book review, play-script, work of social history, or a volume of autobiography, his voice was the same. Bluff, warm, confessional at times, amused, cheeky, worldly but, above all, bubbling with childlike wonder at the human condition. When I read him I can hear him between the lines puffing on his pipe and tapping the stem against his teeth as he searches for the right word to underline the sentiments he has in mind to convey. I revised my opinion of Virginia Woolf when I learned she’d dubbed Priestley (and Arnold Bennett, another great humanist writer hailing from a long way north of Bloomsbury) tradesmen of letters in the snobbish way only someone not needing to work for a living can. But, rest assured, he gave as good as he got in a delightfully catty spat played out in the newspaper columns of the time.

Seek out of his books: you won’t regret it.

My all-time favourite sketch with words comes from Priestley’s travels around England in 1933. His vignette of Hull fish-market makes me think of Charles Laughton, my nose wrinkle, my toes freeze and my ears tingle every time I read it:

It was very raw among the cod and codling and the ice and salt. The breath of the Arctic was stinging our cheeks . . . I only saw a few halibut, but these were of gigantic size, lying there like murdered Roman emperors.

Ephemera from a bygone age 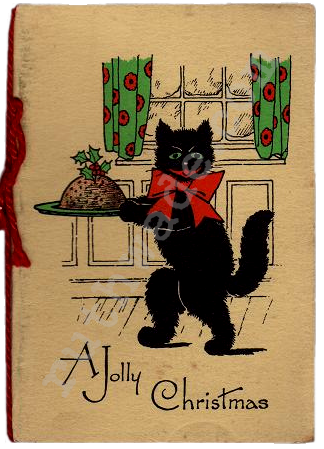 I have a few vintage Christmas cards which were amongst my great-aunt May’s effects – and I’ve kept for nearly 40 years. What did they mean to her? Were they left over and got forgotten in a pile of correspondence or at the back of a drawer? I can’t believe it was because she liked the pictures (although the cat above is wonderfully sinister). All date from the period between the two world wars and the one with the good luck swastika must be from before the symbol became associated in the public mind with the Nazi party (although it was adopted by them as early as 1920).

These original storyboards from early 20th century comic Merry and Bright are framed on my front room wall. I inherited them from my great uncle Arthur’s collection. He was an artist (see my piece on music halls) but I doubt these were by him as they don’t have his style. The boards have a typewritten number on the front (number 502 in the sequence is missing but it isn’t too difficult to work out what happened) and his comments written on the back in blue pencil – which all jobbing artists used at the time to edit work.

I love the simplicity of the story. And the poor spelling in the final speech bubble.

The library books Oscar Kirk listed at the front of his 1919 diary.

With little spare money to spend on amusements, Oscar (aged 15) filled his precious leisure hours with playing in the street, listening to the radio, going to the variety theatre or picture palace, and reading both books and comics. Adventure stories were very popular at the time and appeared to be his favourite. I can only guess at the goings-on behind some of the titles . . .

A HardKnot: tec’ story
The Adventures of an Aid-de-Camp
The Purple Sand
Gaspar The Gaucho
Treasure Island
New Arabian Nights
Gulliver’s Travels
The War of The Worlds

A snippet of an intriguing story from a 100 year old comic.

Sadly, I don’t have all the original storyboards for this captioned comic strip from Merry and Bright. The comic started in 1917 and judging from the Norfolk jacket and knickerbockers of the chap hurling the life preserver, this was probably printed in an edition from before WWII. The handwritten captions on the back are fabulous. 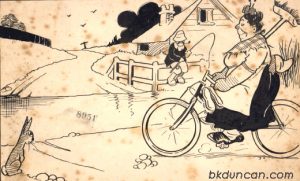 Dear Boys & Girls, I was wheeling my way to the Lady de Wiff Woff’s country seat, having got a job to dust the coals when I came across a water-splash . . . 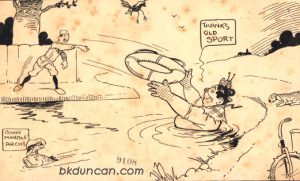 I screamed lustily for aid. Then did a johnny who was walking along  the other bank, seize the lifebuoy & heave it towards your humble. Nimbly catching it, I scrambled out of the river.

[Note the frog riding on the fish and calling out the stops like a bus conductor. Wonderful.]

These books aren’t about writing

When I was 17 I inherited ephemera kept safe through two World Wars.