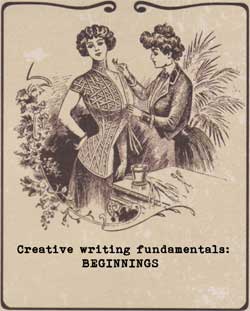 If you feel you have to write the perfect first sentence before you can go on, you will never get beyond it.

Beginnings are a starting point – so far, so obvious – and their role at first draft stage is to get the story and the writer both moving. Forward, for now. But you will have to come back to it because in the process of writing the rest you will be discovering what the story is really about, having new ideas, flashes of inspiration, or maybe changing the entire premise, and the beginning will now no longer be fit for purpose. It will belong to a different piece of work.

I start my novels with an opening image, not writing a word until I can see it clearly in my head. But I have to be able to inhabit it as well, to know how my senses would respond – if I were in that room would I feel cold? What smells are coming through the window? Can I hear the traffic, the clock ticking, other people? These details wouldn’t go into the opening lines – or even the first paragraph – but they inform the tone. And that’s what I work on. I need to get that to feel right because the rest of the story will, like a piece of music, follow that opening chord. The words themselves can change. They will change. I’ve learnt that and don’t fret too much over them.

Screenwriters pay attention to ‘the hooks’ at the beginning of their scripts. Novelists and short story writers include them when they raise questions to entice the reader in and compel them to want to find out more. To read the next sentence, the next paragraph, the next page, the following chapter. The questions simply are:
Who?
When?
What?
Why?
How?

Beware of a beginning that over-promises. If you’ve followed my lesson on plot, then you’ll know it is a chain of cause and effect culminating in a final crisis. So if you start with WW3, the only legitimate ending would be Armageddon.

What some other writers have to say about story beginnings:

The first scene is radically important because here you set the mood, and hence the reader’s state of mind, for the whole course.
May Sarton

My greatest trouble is getting the curtain up and down.
T. S. Eliot

The last thing ones knows when writing a book is what to put first.
Blaise Pascal

The audience will give you all their attention in the play’s first fifteen minutes; but in the sixteenth minute they will decide whether to go on the journey you want them to take.
Moss Hart

The first scene, even the first word set down is the terrifying moment when the ‘thing imagined’ becomes reality. It is also a great relief.
May Sarton