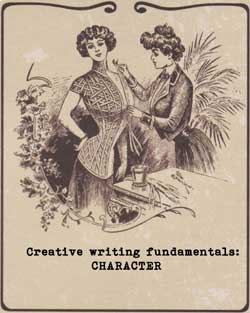 If you skimp on the realisation of your characters your story will suffer.

A writer needs to know their characters inside out before they can make them real to the reader – if you don’t, you run the risk of making them cardboard cut-outs or stereotypes.

If you put yourself firmly in your character’s heads then their thoughts, actions and reactions will be plausible as the reader will recognise them as being those of real people. TIP: Try writing a page from your character’s journal or a letter to a dear friend; you may never use the material but will gain insights into what makes your character tick and can use that to build on.

Bring your characters to life by paying attention to:
– How they think and speak
– How they look
– What their memories are
– What relationships they have (or had)

What does your character want more than anything else in the world? What conflicts might they experience through the gulf between their expectations and reality?

It is conflicts that bring your characters alive so build a variety into their situation and personality that you can draw on within the plot. Consider:
– Career aspirations v family obligations
– Love v duty
– Moral upbringing v current temptations
– Short-term goals v long-term objectives

The reader doesn’t have to like your characters but they do have to be interested in, or care about, what happens to them.

What some other writers have to say about the process of characterisation:

A novelist moves into the life of her characters, and during the process of writing their world becomes more real than her own.
P. D. James

A novel must contain at least one magnetic character. At least one character capable of keying the reader up.
Elizabeth Bowen

In fiction, I feel the most intelligent, and the most free, and the most excited, when my characters are full invented people.
Toni Morrison

The characters’ lives have gone on before you chose to have the action of the play begin.
Edward Albee