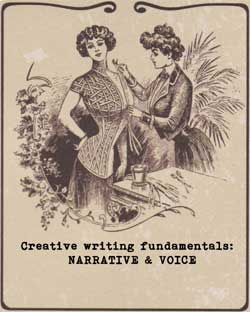 Your story plot will not be unique – some other writer in the history of the world will have been there – but the way you tell it will be.

The narrative could involve storytelling devices such flashbacks, letters or diaries; it can jump around in time or even unfold in reverse. But the overall construction will always comprise a beginning, middle and end.

Choosing the point of view (POV) for a story has a big effect on how it’s told. There are pros and cons to each:

When you change POV, do it consciously and as infrequently as possible. Inside a character’s head the reader sees the world through their eyes, feels their emotions, and takes up their causes – quite literally, their points of view. So when you shift it abruptly you force the reader to experience the scene differently, risking losing engagement with the story.

When you tell your story, aim for immediacy. The reader wants to be involved in what is going on. Patricia Highsmith gave the following set of scenarios that illustrate the point brilliantly:

You read about a car crash in a newspaper. It doesn’t mean very much to you.
Someone tells you about an accident she has seen. This means a little more.
You actually witness the car crash. More still.
You yourself are involved in the accident.

Narrative summary is the technique of jumping from one scene to another, or straight into the heart of a scene. Beware of using it too often or the reader can feel as if they are skating over the surface of experiencing the story. And never be tempted to have Hamlet dying off-stage (reporting instead of showing your story’s climactic or dramatic moments).

What some other writers have to say about narrative & voice:

All the fun’s in how you say a thing.
Robert Frost

Once he has dredged the depths of his unconscious, the writer must clothe what he has to say in the garments most suited to it, and that is the second most important aspect of his art.
Robertson Davies

Use short sentences. Use short first paragraphs. Use vigorous English. Be positive, not negative.
Eliminate every superfluous word.
Hemingway

The adjective is the enemy of the noun.
Voltaire

The greatest thing in style is to have command of the metaphor.
Aristotle

Freshness/spontaneity, simplicity and clarity. The holy trinity in the art of fiction writing.
Kent Haruf

I construct sentences. There’s a rhythm I hear that drives me through the sentence. And the words typed on the page have a sculptural quality. They form odd correspondences. They match up not just through meaning but through sound and look.
Don DeLillo

The writer’s style is himself, and we are all of us changing every day – developing, we hope! We leave our marks behind us like a snail.
Henry Green

Clarity should be in the front of your mind at all times. It is the best guide to good style also. In a suspense book, it is vital.
Patricia Highsmith

The best spy stories read as though there were always something vague and sinister behind the curtain. In most of the others you are just afraid of the man with the gun.
Raymond Chandler

I enjoy the neglected little art of narrative, sheer story-telling, my own or anybody else’s.
J. B. Priestley

Writing has laws of perspective, of light and shade, just as painting does, or music. If you are born knowing them, fine. If not, learn them. Then rearrange the rules to suit yourself.
Truman Capote

One has to work work very carefully on what is in between the words. What is not said. Which is measure, which is rhythm and so on. So, it is what you don’t write that frequently gives what you do write its power.
Toni Morrison