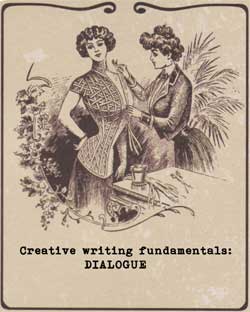 Dialogue is selective. It is not reported speech which is usually full of inanities, repetitions, and often involves people talking over each other.

Dialogue is often more effective by keeping it short. No speeches.

Every piece of dialogue (although not necessarily every sentence in it) must serve a purpose, telling us about the characters or taking the story further.

Dialogue should never make the characters static – they don’t stop what they are doing to speak. They should act out the scene as they would on stage or in a film.

Dialect is difficult to pull off. Try using word order or colloquialisms instead as they are less likely to confuse or alienate the reader.

Eliminate all the speech tags ‘she explained with frustration’, ‘she breathed’, ‘she said angrily’ and all the rest. If you choose your words carefully then the emotion the character is feeling – angry, afraid, apprehensive etc – will sing out and the dialogue will be much stronger.

Dialogue shouldn’t be too smooth and formal. If it is, try using more contractions or sentence fragments.

Beware of the characters voicing things they already know because you want the reader to know them too. No one would say: ‘As you know, Fred, we lost our first daughter in that tragic car accident’. Find some other way to get the information across (ideally showing it in action).

Characters can misunderstand each other, lie, mislead, and say things they don’t really mean to say just as much as we do in real life.

What some other writers have to say about the tricky art of good dialogue:

Dialogue is the ideal means of showing what is between the characters. It crystallizes relationships.
Elizabeth Bowen

Dialogue is always an immediate scene, which is one reason why readers love it.
Sol Stein

Never use slang except in dialogue and then only when unavoidable. Because all slang goes sour in a short time.
Hemingway

Characters in dialogue are required to more or less move the story along. The voices of the characters are also required to be authentic.
Jane Smiley

What counts is not what is said but the effect of what is meant.
Elizabeth Bowen