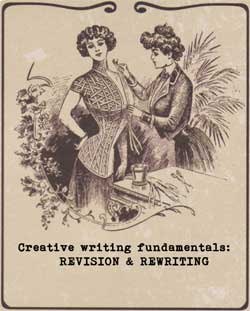 A good writer is a good re-writer.

Everyone cringes over mistakes they’ve made in their first drafts – but the good news is you can make it better.

No one, and I mean no one, ever crafts a great story straight off. It takes time and a lot of effort to even get close to that ideal.

I can’t stress enough that you have to write something in the first place in order to rewrite. Mulling over an idea in your head and changing it as you go along may be instructive – but it isn’t rewriting. For that you have to put pen to paper (or fingers to keyboard).

My top ten tips for rewriting the Ruth Wade way (in no particular order):

What some other writers have to say about revision & rewriting:

The biggest difference between a writer and a would-be writer is their attitude to rewriting. First drafts are shit.
Hemingway

The first draft of a book is the most uncertain where you need guts, the ability to accept the imperfect until it is better.
Bernard Malamud

I find myself cutting constantly to keep the rising curve clean . . . It often happens that whole chunks can come out because what they convey is absorbed in the total drive of the book.
May Sarton

First drafts are for learning what your novel is about. Revision is working with that knowledge to enlarge or enhance an idea. To reform it.
Bernard Malamud

I do a lot of rewriting. It’s very painful. You know it’s finished when you can’t do anything more to it, though it’s never exactly the way you want it.
James Baldwin

Writing is not like painting where you add. It is not what you put on the canvas that the reader sees. Writing is more like sculpture where you remove, you eliminate in order to make the work more visible. Even those parts you remove somehow remain – only you don’t see them.
Elie Wiesel

I might write four lines or I might write twenty. I subtract and add until I really hit something I want to do. You don’t always whittle down, sometimes you whittle up.
Grace Paley

[And a long one, but a masterclass in the art of revision & rewriting.]
Let’s say it is a mess. But you have a chance to fix it. You try to be clearer. Or deeper. Or more eloquent. Or more eccentric. You try to be true to a world. As the statue is entombed in the block of marble, the novel is inside your head. You try to liberate it. You try to get this wretched stuff on the page closer to what you think your book should be – what you know, in your spasms of elation, it can be.
Donald E. Westlake