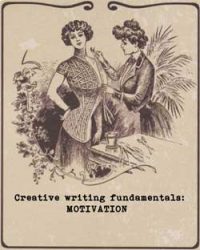 Motivation is the key to fiction. The characters must have a deep reason that matters to them for doing what they do.

Motivations will be formed by a character’s past – what it is that turned them into who they are.

You have to know a character’s backstory very well to be able to convey motivations and emotions. If you don’t, you’ll leave them out and create flat characters or go for stereotypes.

Motivations can be simple or complex. They can be known to the character or discovered by the reader (and perhaps by the character too) as the story goes along. But the writer HAS to know them.

The main character must need something and there must be opposition to them obtaining it – hunger provides no conflict when there is plenty of food to be had – because it is their motivation to succeed that provides the plot and drives the story.

Characters aren’t the only ones requiring motivation, authors do too. What some other writers have to say may help turn sparks to flame:

What is the ultimate impulse to write? Because all this is going to vanish. The only thing left will be the prose and poems, the books, what is written down. Man was very fortunate to have invented the book. Without it the past would completely vanish, and we would be left with nothing, we would be naked on earth.
James Salter

At sixty-three years of age, less a quarter, one still has plans.
Colette

If you want to write, you can. Fear stops most people from writing, not lack of talent, whatever that is . . . We need stories to live, all of us. We live by story. Yours enlarges the circle.
Richard Rhodes

What fascinates you will probably fascinate others. But, even if it doesn’t, you will have devoted your life to what you love.
Diane Ackerman

Think about one page, merely one page, every day. At the end of 365 days, the end of the year, you have 365 pages. And you know what you have? You have a full length book.
Jerome Weidman

If you want to write, write. This is your life. You are responsible for it. You will not live forever. Don’t wait. Make the time now, even if it is ten minutes once a week.
Natalie Goldberg

When starting to think about any novel, part of the motive is: I’m going to show them, this time. Without that, a lot of what passes under the name of creative energy would be lost.
Kingsley Amis

It doesn’t really matter whether you’re first rate, second rte, or third rate, but it’s of vital importance that the water finds its own level and that you do the very best you can with the powers that are given you.
Lawrence Durrell

[This quotation was categorised as motivation in The Paris Review interviews, and it made me laugh which is probably as good a reason to include it here as any.]
I knew early on that I  was going to be a writer . . . My father [a famous divorce barrister] really did come home to me one night in the nursery and say, ‘I had a wonderful day in court, John. Terrific trial,’ he said. ‘Managed to prove adultery by evidence of inclination and opportunity,’ he said. ‘The only piece of evidence we had was a pair of footprints upside down on the dashboard of an Austin 711 parked in a Hampstead garden suburb (sic).’
John Mortimer